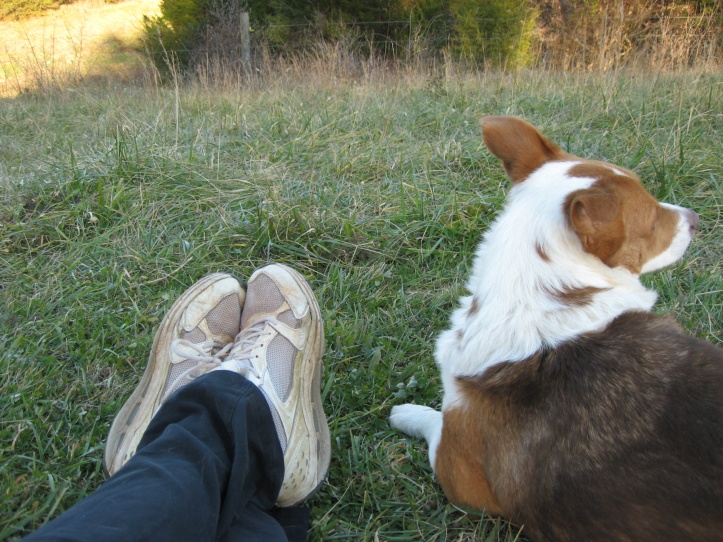 This is my favorite picture of Snickers and me.  It tells everything there is to tell about who I am, about who he was, and about our partnership.

By 2007, the six dogs I moved to Virginia with had pretty much timed out.  I decided I would foster, so I responded to an ad from a rescue group in Fredericksburg, and shortly thereafter, a stressed, confused, 8-month old corgi mix arrived.  He had been left at the shelter in Lexington because his people’s landlord had reminded them that there were no dogs allowed.  Go figure.  It was clear that he had been cared for and he was not trusting of change.

No worries, dear boy, because from that hot summer day in 2007, until Sunday, November 28, 2021, you and I were an unchanging team, except for that aging thing, that no matter how hard I tried, I couldn’t control.

I knew the end was coming.  He seemed to fade a little every day over the last few years.  He had the physical changes that develop over time when you are an active soul, and he had a cough that was troubling.  My vet and I decided that at his age, we were not going to change any outcomes by putting him through excessive testing.

But long before the last few years, Snickers and I walked, and hiked all over the place.  He loved to go on trail rides, happily swinging along on the heels of Bogey, the horse I used to ride.  He never met a body of water he didn’t launch in to – almost dumping me in the middle of a lake when he decided to walk off our kayak one time!  He learned tricks and obedience, even though he thought the whole effort was a ridiculous human folly.  He knew when to sit and come and dance on his back legs without silly intervention.

As Snickers aged, we grew apart some, he just couldn’t go on the long walks and his trip to the river last summer exhausted him to the point I don’t think he enjoyed it.  He started sleeping on the floor because he lost his jump.  I lifted him up on occasion, but he didn’t like to be picked up, so that was a rare and wonderful moment when he did come up for a snuggle.  Even as time changed our relationship, my love and respect for him was always steadfast.  He was simply an honest, solid, kind, humorous, trustworthy soul, and I am blessed to have spent so many years in his light.

Something happened in him on Sunday.  He came in the house from a short tour of the front yard, he froze in the front hall, almost like he was in a trance, and from that moment on, he started to fail.  By the time I got him to the Sunday vet, an hour away, he couldn’t walk.  An x-ray confirmed significant cancer.  Symptoms suggested that something had ruptured.  There was no choice but to end his discomfort peacefully.  I believe that by that time, he had already started his journey away from me.

He is the fourth of my senior dogs to leave me this year.  Change is all around me as I face aging issues myself, and my canine family reaches their senior years.  I miss them all.  I think of them and tears well up from the very bottom of my soul.  I have to believe they will all be there to greet me when my time comes.  In the interim, I will carry on and hold happy memories close.

Thank you, Snickers. Thank you for being my friend, my partner, my cohort and my anchor.  Godspeed dear one.

Thank you for looking at my blog.  I am grateful to you for taking a moment of your time to read about my life with a bunch of rescue dogs, a couple Border Collies,  and an intrepid cat.

I invite you to visit my Facebook store @thepatchworkdoghandmade.  It is a work in progress!

And don’t forget to give your dog a hug today!  Nancy